The stomach is a muscular, hollow organ in the gastrointestinal tract of humans and many other animals, including several invertebrates. The stomach has a dilated structure and functions as a vital digestive organ. In the digestive system the stomach is involved in the second phase of digestion, following mastication (chewing). 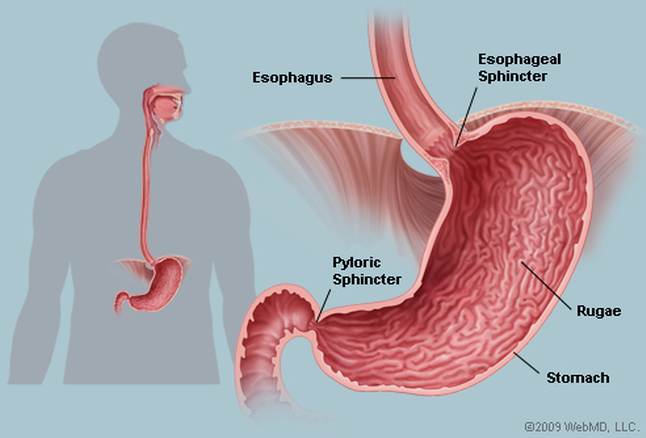 In humans and many other animals, the stomach is located between the oesophagus and the small intestine. It secretes digestive enzymes and gastric acid to aid in food digestion. The pyloric sphincter controls the passage of partially digested food (chyme) from the stomach into the duodenum where peristalsis takes over to move this through the rest of the intestines.

The stomach is located in the superior aspect of the abdomen. It lies in the epigastric and umbilical regions, mostly protected by the lower portion of the rib cage.

The exact size, shape and position of the stomach can vary from person to person. For example, in thin individuals, it is not uncommon for the stomach to extend into the pelvic region.

The stomach has four main regions; the cardia, fundus, body and pylorus:

The medial and lateral borders of the stomach are curved, forming the lesser and greater curvatures:

Sphincters of the Stomach

There are two sphincters of the stomach, located at each orifice. They control the passage of material entering and exiting the stomach.

It is located to the left of the T11 vertebra. Situated immediately superior is the oesophageal hiatus, an opening in the diaphragm through which the oesophagus travels. Histologically, the sphincter is marked by an abrupt change from stratified squamous epithelium to simple columnar.

The inferior oesophageal sphincter is termed a physiological (or functional) sphincter – it does not have any specific muscle (see the oesophagus for more on this).

The pyloric sphincter lies between the pylorus and the duodenum. It controls of the exit of chyme (food and gastric acid mixture) from the stomach.

In contrast to the inferior oesophageal sphincter, this is an anatomical sphincter. It contains smooth muscle, which constricts to limit the discharge of stomach contents through the orifice.

Emptying of the stomach occurs intermittently when intragastric pressure overcomes the resistance of the pylorus. The pylorus is normally contracted so that the orifice is small and food can stay in the stomach for a suitable period. Gastric peristalsis pushes the chyme through the pyloric canal into the duodenum for further digestion.

Within the abdominal cavity, the organs are covered in a double layered membrane, called the peritoneum. It supports the viscera, and attaches them the abdominal wall.

The greater and lesser omenta are two structures that consist of peritoneum folded over itself (two layers of peritoneum – four membrane layers). Both omenta attach to the stomach, and are useful anatomical landmarks:

The stomach receives innervation from the autonomic nervous system:

The gastric lymphatic vessels travel with the arteries along the greater and lesser curvatures of the stomach. Lymph fluid drains into the gastric and gastro-omental lymph nodes found at the curvatures.

Efferent lymphatic vessels from these nodes connect to the coeliac lymph nodes, located on the posterior abdominal wall.

In the mouth, we chew and moisten solid food until it becomes a small mass known as a bolus. When we swallow each bolus, it then passes through the esophagus to the stomach where it is stored along with other boluses and liquids from the same meal.

The size of the stomach varies from person to person, but on average it can comfortably contain 1-2 liters of food and liquid during a meal. When stretched to its maximum capacity by a large meal or overeating, the stomach may hold up to 3-4 liters. Distention of the stomach to its maximum size makes digestion difficult, as the stomach cannot easily contract to mix food properly and leads to feelings of discomfort.

The stomach produces and secretes several important substances to control the digestion of food. Each of these substances is produced by exocrine or endocrine cells found in the mucosa.

The activity of the stomach is under the control of several hormones that regulate the production of stomach acid and the release of food into the duodenum.