Diversion colitis is an inflammation of the colon which can occur as a complication of ileostomy or colostomy, often occurring within the year following the surgery. It also occurs frequently in a neovagina created by colovaginoplasty, with varying delay after the original procedure. Despite the presence of a variable degree of inflammation the most suggestive histological feature remains the prominent lymphoid aggregates. A foul smelling, mucous rectal discharge may develop from the inflamed mucosa of the distal, unused colon. 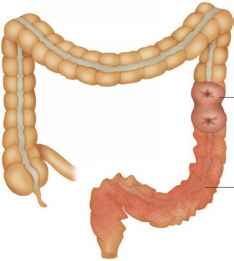 Fecal diversion is done to re-route the waste, in order to treat some diseases in the large intestine. The healthy end of the large intestine—or in some cases, the small intestine—is attached to a surgical opening in the skin. The waste is eliminated through the small opening, called a colostomy. (If the end of the small intestine is attached to the skin, the opening is called a ileostomy.) The opening has no sphincter muscles. This means that you cannot control the flow of waste out of this opening. Instead, you wear a small pouch, called an ostomy bag, to collect the waste.

Diversion colitis develops in the part of the intestine that is no longer in use. Scientists do not know exactly why this happens. One factor is that the helpful bacteria that live in the colon do not get the “food” they need. These bacteria usually live on the undigested starches and fiber in normal waste. The parts they consume are called short-chain fatty acids. When the waste no longer passes through that part of the colon, some of these bacteria start to die.

CLINICAL FEATURES — Most patients with diversion colitis evident histologically are asymptomatic. However, the likelihood of symptoms may at least in part be related to the underlying disease. In a study of 36 children with Hirschsprung’s disease, for example, only one child who maintained his ileostomy for six years developed rectal discharge. After restoration of intestinal continuity, he and the other 35 children had no symptoms for up to nine years of follow-up .

By contrast, children diverted because of severe motility disorders may develop abdominal pain and bleeding from the rectosigmoid colon. In an illustrative series, 3 of 18 children who had undergone colovaginoplasty two to seven years earlier developed neovaginal discharge and bleeding due to diversion colitis requiring treatment.

The most common symptoms in adults are rectal bleeding, tenesmus, mucus discharge, and abdominal pain. Symptoms are usually mild, and occur in 6 to 38 percent of patients. Infrequent findings include bleeding requiring transfusion, diarrhea, or sepsis from deep ulceration requiring proctectomy.

DIAGNOSIS — Diversion colitis should be considered in an individual with or without preexisting inflammatory bowel disease, who complains of cramping abdominal pain with a mucoid or bloody discharge coming from a defunctionalized, bypassed distal colon. The clinical onset may begin within a few months after surgery or after a long delay.

The diagnosis is based upon compatible clinical features and histologic findings and exclusion of other disorders that can produce similar clinical findings. These include acute self-limited colitis, C. difficile infection, and (in patients who have had the diversion performed because of ulcerative colitis or Crohn’s disease) preexisting inflammatory bowel disease. A response to short chain fatty acid therapy helps support the diagnosis.

TREATMENT — As noted above, most patients with surgical diversion of the fecal stream do not develop rectal symptoms that require investigation. In those with symptoms, restoration of intestinal continuity should be considered as early as possible after diversion since it is curative. Early reanastomosis is preferred because, with increasing delay after diversion, symptoms often become more frequent and severe and there is a progressive decrease in capacity and involution of the defunctionalized anorectum . Options for patients who are not candidates for reanastomosis are described below.

Short chain fatty acid enemas — The observation that diversion colitis results from a deficiency of short-chain fatty acids (SCFAs) provided the rationale for studies involving SCFA for treatment. Most studies have been small and observational and results have been mixed.

The reports cited above are consistent with our observation that SCFAs work best for diversion colitis when the diverted segment was normal before the fecal stream was interrupted. On the other hand, we have seen two adults with Crohn’s colitis (both of whom presented with spontaneous sigmoid perforation) in whom SCFA rectal irrigation was associated with complete symptomatic response and marked histologic improvement. In those with preexisting inflammatory bowel disease, SCFAs combined with antiinflammatory drugs may be effective.

SCFA enemas are straightforward to prepare and are available at many compounding pharmacies.

Experimental approaches — A pilot study from Brazil described a novel approach in eleven previously healthy young adults (ages 16 to 49) who had undergone loop colostomies because of abdominal trauma. Patients were instructed to irrigate the distal limb twice daily (via the colostomy) with a commercial fiber solution. Endoscopic scores improved significantly in the distal segment close to the irrigation site and the rectum. Crypt depth also improved close to the irrigation site but not in the rectum. If confirmed, these observations lend support to the nutritional hypothesis for diversion colitis and suggest a possible new means for intervention, at least in those with loop colostomies.

Cancer surveillance — Surveillance for cancer in the diverted segment is not necessary unless the underlying condition for which the operation was performed has malignant predisposition for which screening is useful.

Prophylaxis — There are no studies evaluating the benefit of prophylactic treatment to prevent diversion colitis.

Crohn’s disease — Diversion performed in a patient with Crohn’s disease demands special consideration. Clinical experience has shown that, if the distal segment was not involved clinically before diversion, early reanastomosis will improve symptoms that develop from that segment after surgery and may help avert stricture formation.

In the unusual patient with known distal colonic Crohn’s who develops rectal symptoms after diversion, a positive response to SCFA enemas supports the diagnosis of active diversion colitis and should encourage reanastomosis.