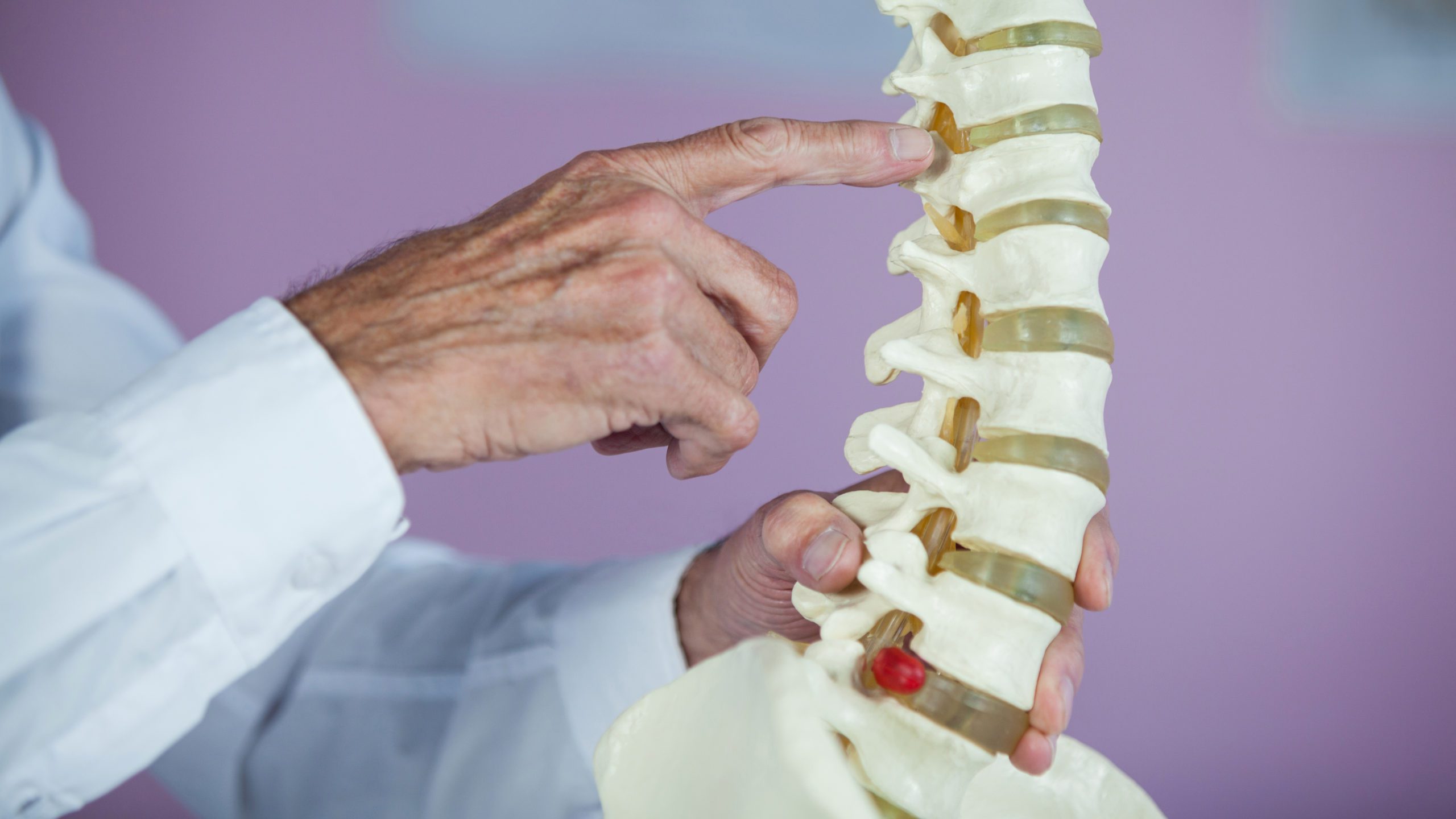 The spine is located in the back of the trunk and is composed of 33 vertebrae, most of which are connected by joints. Nine of the vertebrae that are located in the sacrum and tailbone are fused. Except for the fused vertebrae and the first cervical segment, there is an intervertebral disc between each pair of vertebrae in the column. They separate the backbones and provide cushioning, minimizing the negative effect of the movement. The whole structure of the vertebral column helps to evenly distribute pressure and work as a shock absorber preventing your spine from injuries. The spinal canal also contains the spinal cord, which is well protected by the backbones.

Structure of the vertebral column

Typically the backbone is divided into regions that have specific functions and characteristics.

Cervical. The cervical region of the spine comprises the first seven vertebrae found closest to the skull in the neck area. They are referred to as C1 to C7, starting with the most proximate to the head and continuing downward in consecutive order.

Thoracic. There are 12 thoracic vertebrae located in the chest area of the vertebral column. They are named T1 through to T12, beginning with the next vertebra after C7.

Lumbar.  In the lower back and pelvic region of the spine, there are five lumbar vertebrae: L1 through L5. L1 is located immediately after T12, with an intervertebral disc separating them.

Sacrum. It is a large triangular bone composed of the five fused sacral vertebrae: S1 through S5.

Tailbone. It is a final segment of the vertebral column that is also referred to as the coccyx. Usually, it is formed by the fusion of three or four vertebrae.

In some cases, an additional vertebra can be found somewhere in the spine, or a vertebra can be missing in one of the regions. If it happens, the deficiency is usually made up in another area. It happens very rarely, but if it does, the cervical area compensates for the problem.

The vertebral column is not entirely straight. There are curves in your back that provide balance and also work with the intervertebral discs to help reduce the shock and stress that occur during movement.

The first curve is forward and is located in the upper part of the backbone (the cervical curve). It is typically the slightest curve of the spine. The thoracic curve in the middle part of the vertebral column is backward. This curve gets exaggerated in the case of a condition known as kyphosis. There is also a forward curve in the lower back called the lumbar curve, which is less apparent in men than women. An abnormal curve in the lumbar region is sometimes called lordosis. The sacral curve is forward and downward.

An infant is born with the sacral and thoracic curves known as primary curves. The curves in the lumbar and cervical regions are not present in the spine at birth. They develop later as a child grows. These are known as secondary curves. The cervical curve gradually forms as an infant learns to hold his head up and sit without support. The lumbar curve develops later when the child learns to walk.