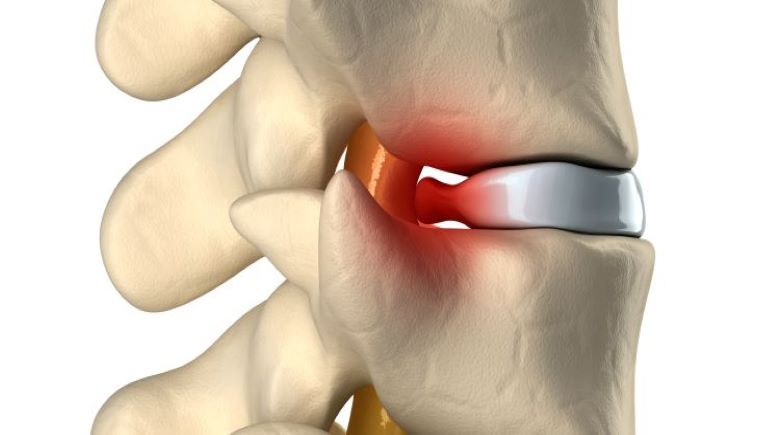 Symptoms of herniated disc include:

A doctor or chiropractor may diagnose a herniated disc. Using tests and scans, they can pinpoint the source of the problem and prescribe treatment. Some diagnosis methods include:

Your chiropractor will also check the state of your nerves, reflexes, and muscle strength. In addition, other tests will evaluate posture and spinal column. To do so, chiropractors use techniques such as:

What is Herniated Disk Treatment and Surgery?

Herniated disc treatment often depends on the symptoms produced by the condition. A herniated disc occurs when the gel-like center of the disc breaks through its fibrous outer shell.

This condition can cause symptoms like pain and abnormal sensations in the legs or arms. Symptoms depend on where the herniation occurs. Herniated disc treatment will be directed at the affected area of your spine, which could be either of the following sections:

Not every case of a sore back will result or require herniated disc treatment and, in most cases, don’t require surgery.

Epidural injections used as herniated disc treatment can pose risks such as loss of bowel and bladder control and reduced sensation and movement in arms and legs. Some patients can also experience severe pain and headache. If these symptoms are experienced after an epidural steroid injection, it is necessary to seek medical attention.

Both OTC and prescribed medications can result in side effects such as fever, weight gain, nervousness, increased blood pressure, and peptic ulcers.

Other Options of Herniated Disc Treatment

Other herniated disc treatments also include acupuncture, acupressure, and massage. But, again, it is important to take it slow and ask about therapies that will best suit your condition.

Exercise is often recommended as a herniated disc treatment. It can help reduce pain and ensure the long-term well-being of your back. A physical therapist also teaches patients how to take proper care of themselves when they’re at home.

Active herniated disc treatment help with posture, strength, flexibility, joint movement, and core stability. In addition to these, the doctor may also recommend an exercise program to help you achieve maximum benefit from your therapy. You and your therapist will develop your program based on your diagnosis and unique health history.

The ultimate goal of physical therapy for herniated disc treatment is to give you the knowledge to maintain a lifestyle that is free from pain. In addition, you will learn ways to strengthen and condition your back and how to take care of yourself, so you understand the best ways to treat your symptoms.

As with any new treatment or program, inform your provider if you have any health problems, conditions, or concerns other than your herniated disc pain. Alternative herniated disc treatments work best when they are combined with conventional medical therapies.

Most people with this condition recover without surgery, but some patients require surgery as herniated disc treatment. Surgery is usually only considered after several months of conservative treatment. Many surgeries can be performed with minimal invasiveness. It means smaller incisions, less time spent in the hospital, quicker recovery, and less post-operative pain.

A discectomy is one type of surgical treatment for herniated discs. In this procedure, a portion or all of a damaged disc is removed. If a disc in the neck has herniated, an incision is made in the front of the body. It is known as an anterior approach. Herniated disc treatment that involves removing the lamina of the vertebra to increase space in the spinal canal is called a laminectomy.

Sometimes during minimally invasive spine surgery (MISS), the surgeon makes a very small cut (incision) through which a tiny camera can be inserted. Surgical instruments that are also very small are used in these procedures, and sometimes special imaging equipment is also needed.

Other spinal procedures are sometimes needed as herniated disc treatment. These may include:

If your physician recommends surgery as a herniated disc treatment, be sure to ask questions about any concerns you have. For example, it would be helpful to know the purpose of the procedure, the results you can expect, and the potential complications that may occur. Your surgeon will be happy to answer your questions.

Herniated disc treatment includes surgical and non-surgical options. However, as with all treatments, there are certain risks some patients may face. For example, risks of herniated disc surgery may include:

One of the best-herniated disc treatments is prevention. Unfortunately, not all causes of herniated discs can be prevented, but there are ways to maximize your spinal health.

Smoking increases your risk of having back problems. It could be because smoking decreases blood flow or because smokers also tend to have other unhealthy habits. For example, one study showed that young adult smokers who smoked long-term were two times more likely to develop pain in their lower back than nonsmokers.