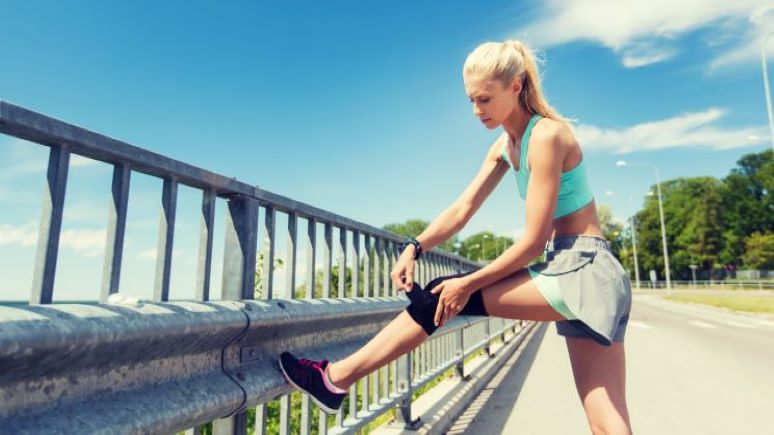 If you think you have an ACL injury, you need to see your physician or health care provider. Do not participate in sports or other activities until you have received medical treatment.

First aid treatment for an ACL injury can include:

The main focus of the initial treatment for an ACL injury is to decrease the swelling and pain in the knee. Resting the knee and over-the-counter pain medications, such as acetaminophen, can help. Nonsteroidal anti-inflammatory drugs (NSAIDs) can also help decrease inflammation and reduce swelling. Some doctors recommend using crutches for patients with an ACL injury to allow the knee to rest until they can walk without limping. In some cases, blood pooled around the knee joint needs to be drained with a needle. In many cases, the doctor recommends physical therapy following an ACL injury. Electrical stimulation, ice, and rest periods while the leg is elevated are some of the treatments therapists may use.

Exercises are vitally important to help patients with an ACL injury regain their muscles and joints’ normal movement and function. Often the patient should start range-of-motion therapy and exercises right away to help prevent the loss of any movement in the knee. It may include careful massage or pressure applied by the therapist, riding a stationary bicycle, and gentle stretching exercises. Hamstring and quadriceps muscle exercises are also important. As the pain of an ACL injury subsides and strength increases, more exercises are added to help the knee become more stable.

In some cases of ACL injury, the physician may recommend a brace. An ACL brace is specially designed to help improve the knee’s stability and is not like those that you can purchase at a drugstore or over-the-counter. The specialist often recommends these when surgery is not planned, and the knee is unstable. Still, they are also often recommended following ACL surgery. These braces can protect the knee from becoming unstable during moderate activities. However, there is no evidence that they help prevent arthritis that occurs due to an uncorrected ACL injury. In addition, an ACL brace does not protect the knee in all cases of extreme physical activity involving jumping, pivoting, or cutting. As a result, they may give a false sense of security.

In most cases, an ACL injury involving tears and ruptures cannot be stitched (sutured) back together. Instead, it must be rebuilt to restore stability to the knee. A tissue graft replaces the torn ligament, and a new ligament grows on to this graft. Donor grafts can be taken from tendons in the knee, the back of the thigh or hamstring, or the quadriceps tendon. Sometimes an allograft is used, which is taken from a cadaver. An allograft procedure typically takes less time to perform since the tissue does not need to be harvested from the patient’s knee. It also does not cause a disruption in the patient’s normal tissue to use as a graft.

Surgical reconstruction for an ACL injury is an arthroscopic procedure that is less invasive than an open procedure. Small incisions are used, and other benefits include quicker recovery times, less surgical pain, and shorter hospital stays. Surgery is not typically done immediately after an ACL injury occurs unless it is part of treatment for an injury involving combined ligaments. Delaying surgery decreases the risk of scar formation, limiting movement in the joint. Surgery is usually postponed until inflammation has resolved and motion has returned.

Non-surgical treatment for an ACL injury usually lasts at least six weeks. Most often, physical therapy is recommended. If a brace has been prescribed, a physical therapist can help the patient obtain and learn how to use the brace. Therapists will also instruct the patient in exercises throughout the rehabilitation period to regain strength, motion, and stability. The patient can return to their normal activities when the hamstring and quadriceps muscles have returned to the level of strength and function present before the ACL injury. In addition, swelling caused by the ACL injury must be no longer present, and the doctor must assure knee stability.

Most surgeons recommend formal physical therapy following ACL reconstruction. It typically lasts from four to six months and is a progressive program. Initially, therapy may be scheduled a few times a week. Then, if rehab goes as planned, patients are usually given a home program of exercises after the first four to six weeks. During this period, the therapist sees patients every several weeks.